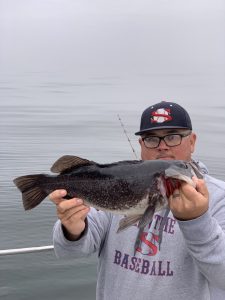 Bottom fishing was very good this morning especially in the rockfish with limits on most all boats but it was a fairly slow Lingcod bite again for the 2nd day in a row.  (The picture you see here was a 7-pound sea bass.  You see them this big just once in a while)  The crabbing made up for it though with really good scores on the crabs and for the first time since anyone can remember at least from Tradewinds was there were very few girl crabs.  We have been sorting thru just “gobs” of females all season long until TODAY.  One boat reported only one female and another had zero females.  The boys have taken over !!

From what the radio chatter was saying slower then yesterday but still quite a few fish going home with the folks out trying for them.  A number of Chinooks today we were told.

Two boats offshore today and we will get those reports to you by early evening.  The next trips out for Tuna will be Monday.